Do not worry about tomorrow... 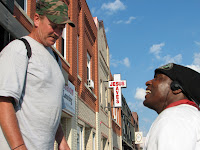 Monday I was in an incredibly good mood. Not a common thing for a Monday, I have to admit. But there it was, a good mood. Then I came to work.
It isn't that I don't love my job or the fact that I get paid to help people. It's just that sometimes the "troubles" of life start to weigh heavy on your shoulders. Even on days that you're in an incredibly good mood.
Not that most of these were even my problems. Difficulties with guys on the program means difficulties for the program manager and director of operations; often times even the executive director gets a goodly dose of the trouble circulating around. And, despite what we may like, those feelings of agitation affect everyone around you. You wouldn't think one or two individuals could cause so many people so much frustration. However, when you're passionate about transforming the lives of those caught in addiction, that passion pulls you into the daily drama that is endemic with an "old life" being shaped into a "new one."
This frustration, of course, isn't uncommon in our line of work, but it was only one point in an overall "bad day." It was a busy day, and we were short staffed. It seems that need doesn't know when someone has gone home ill or the receptionist is taking the day off. Sales people must have made a resolution to make more calls in the New Year, because there were plenty of those, as well.
The front office was getting a makeover, a fact with which some people were pleased and others were not. Pleased or not, one of the new cubicles had to be made ready for the receptionist's return the next day. And, again, the people calling or coming to the door, didn't realize that the majority of the time I had to hop up from crawling on the floor, sorting items, to answer their incessant calls.
So the day went. Things that needed to get done remained undone, but by the end of the day, I was too worn out to care.
Then, the miraculous thing happened this morning. On my way to work, I was recalling my unusually good mood of the previous morning, and I had a revelation. Instead of looking at my Monday and thinking how it had ruined my good mood, I thought how blessed I was that God gave me such a good mood to combat such a trying day.
There are so many circumstances clamoring for us to be afraid or angry. To be anxious or agitated. But there really are blessings all around us. In spite of our moods, hungry people were fed yesterday. In spite of problems, another step has been made toward "new life" for the men in our Transformation Program. A woman who needed food, despite the fact that she worried about the weight of the basket, received abundantly above what she, apparently, asked or thought. In fact several men, women, and families received baskets of food or bags of hygiene items. Men, women, and children, without home or help, were able to find shelter at the Mission. Because of the generosity of those who give to others. It is this generosity that makes it possible for us to continue to help others.
Therefore do not worry about tomorrow, for tomorrow will worry about its own things. Sufficient for the day is its own trouble. Matthew 6:34
Posted by City Rescue Mission at 9:23 AM No comments: 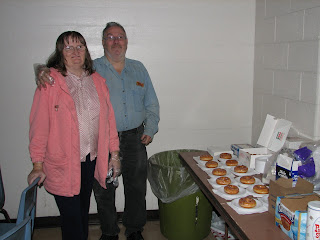 Recently, I heard of an article which ran as an op-ed in the New York Times. The writer of this article (SONJA LYUBOMIRSKY, in the interests of proper source citation) has this to say:

"...Findings like these reveal an all-too-human truth. We care more about social comparison, status and rank than about the absolute value of our bank accounts or reputations.
For example, Andrew Clark, an economist in France, has recently shown that being laid off hurts less if you live in a community with a high unemployment rate. What’s more, if you are unemployed, you will, on average, be happier if your spouse is unemployed, too.
So in a world in which just about all of us have seen our retirement savings and home values plummet, it’s no wonder that we all feel surprisingly O.K."
I.e. The reason we aren't panicking in despair and making a run on our bank isn't because we've decided not to make the mistakes made in the Great Depression, but instead it is because we're okay with being in a recession, as long as everyone else is hurting too...
The reason I am haunted by this article is that I am offended on behalf of every person who comes to the door with a donation. Today, for example, we had several calls from people concerned about the cold weather. They wondered if we had a need of coats for those who come to the shelter; they were going through their closets to get all the extra coats and warm jackets they could find. A man dropped by and left a blanket. He didn't want a receipt; he didn't leave a name. Just a blanket. A woman dropped off 71 hand crocheted neck warmers and made sure to point out some people waiting outside our doors who could use one right away.
This isn't an unusual occurrence. For us it happens every day. So I'm supposed to believe we live in a magic bubble where people are concerned about those who are less fortunate, no matter that they too are in need? Or am I supposed to believe that the woman living on social security who sends us two dollars every month is only doing so out of a sense of superiority? 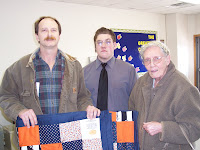 Yes, I am offended. On behalf of all those who give so generously and with such compassion. The Mission may not have the voice of the New York Times, but we do want our supporters, and the many in this country who give so generously to service agencies like ours, to know that we see your generosity. We understand that our country is great because of that generosity. Thank you on behalf of all whom you help. And God bless you.
Posted by City Rescue Mission at 4:16 PM No comments:

It isn't always easy working in a "service" agency. It isn't just the people who are difficult and expect you to be able to provide for their every need and want; it's also the people who truly need help in an area you don't offer services.

A few months ago, we had a woman come to the office who had just moved into the area. She'd come to Lansing to be with her daughter, who has some severe emotional issues. Before she left her hometown, she'd tried to find a job in Lansing but finally had to decide which was more important, her daughter or her job. So she arrived in Lansing with no job, no apartment, no friends.

It was difficult to tell her that we don't have job counselors who are available on a walk-in basis. Much of what we do is offered either for our guests or through another local agency. We gave her the number for this agency and also recommended Michigan Works.

She was so grateful that we took the time just to listen and do what we could, that we felt badly about sending her away with "nothing in her hands," so to speak. But she paused in the doorway.

"I saw your sign. Are you part of the church?"

We told her that we are a Christian organization but non-denominational. She leaned in closer, the door still open.

"Can you pray for my daughter?" And gave us her name. Then she was gone.

What an amazing and humbling reminder to us that, at times we feel the most hopeless, there is still something we can do.
Posted by City Rescue Mission at 11:00 AM No comments: