It's different when you know his name... 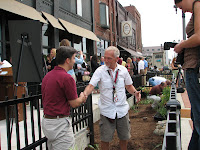 I've always been fascinated with names. The meanings of names... Why people choose to be called by a middle name or nickname rather than their given name... The old hymn tells us that, when we're saved, there's a "new name written down in glory" for each of us, and I think this just emphasizes the natural feeling that a name has more meaning than just a word. A name infers knowledge. The more intimate you are with a person, the more "names" you know. As in, "Why, there's my old college roommate Sally Smith. I called her Snatch," said with a smile of remembrance.

The same is true even in the lowest levels of society. Maybe it's even more true. We all "know" enough of the inner details of the lives of a "Beyonce" or "Brittany," to call these strangers by their first names. But for the men and women living on the street it's "the guy with the bushy hair," or "the lady who always waves when she walks by the window."

If we take the time to ask their name, it shows that we see them as more than just faces waiting in line. They are individuals, with stories and lives separate and unique from our own.

Your attitude changes too, when you know a person's name. They do become less of a "face" and more of a person.

"Oh, there goes Joey!" We say, as we see him on the street. And we care when he's not there and wonder if he's okay.

I think back to around the new year, when a woman stopped at our door. She was angry and agitated, insisting that we were encouraging men not to work by giving them clothing and shelter without making them do something to earn our services. But she wasn't around when, a few weeks later, several of those same men walked across the street to help a driver whose car was stuck in the snow. They weren't asked; they saw the need and went to help. I doubt they asked for anything in return either. Just gave the driver a wave and watched the car on its way.

I wonder if the driver asked their names to thank them. I doubt very much that the angry woman had asked their names. Praise God that, in spite of the flaws and failings of our compassion, there is Someone who will never forget...their names.
Posted by City Rescue Mission at 3:01 PM No comments: 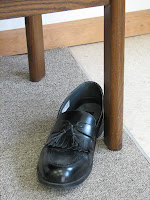 I was going through pictures in our files, in an attempt to put things in order, when I noticed a picture of Ed's shoe. Ed was in our men's Transformation Program. The Mission has a one year, biblically based program which attempts to help men overcome their addictions. Men join the program, many of whom are desperate to change their lives. Sometimes before it's too late.

Ed was one of these men. He seemed to be making great progress. Though he'd been in a few other rehabilitation programs, he believed that ours would be the one he finally finished. The path from which he'd never stray. But, as with too many of these men, after a few months had passed, he began to feel so good and see things so clearly, that he believed he was ready to "go it alone."

Staff members tried to discourage this feeling, tried to encourage him to "stay the course," but Ed packed up his belongings and went home. He promised that he'd be all right. He left behind very few things. Among these was a stray, black dress shoe.

Only a few weeks later, his girlfriend called to ask if she could come pick up the shoe. She needed it for Ed's funeral.

We don't know what went through Ed's mind. If, when he left, he truly believed he was "cured," or if he was only so desperate for a drink that he had little thought of anything else. All we know is that, in the dark of night, Ed, being too drunk to stand, stumbled into oncoming traffic and was killed.

It's a dramatic story, and I wish I could say it was the only story like it I had heard. The tragedy is that Ed's story is not as unique or unheard of as we would wish it to be, and the real victims of this story include Ed's girlfriend and his mother. These two women held onto hope until it was too late.

The men on our program are fighting and struggling for a new life. Donations from our supporters enable us to continually hold out a hand of help to them and their families. Prayers from our supporters encourage them, and us, as they continue their fight. Thank you for helping us help others!
Posted by City Rescue Mission at 4:28 PM No comments:

Love does have a lot to do with it

It's all part of that feeling you get when you've helped someone. The euphoria that comes from knowing you really have made a difference. You've positively impacted the life of a loved one, or even a stranger. I think that's why we get calls from people every day who want to donate their time and energy to helping us help others. People who maybe can't give a lot but want to do something to "fix the problems" of those in need. It's a feeling and a spirit that the government can't force upon people. You can reward someone for compassion, but you can't generate it by simply telling him or her to be "nicer" to others.

We've heard a lot about "change" and "hope" lately. Beautiful words being repeated like a mantra that will make us forget all the ugly things that seem to be happening in the world around us. Things like war and crime. Robbery and selfishness. Foreclosures. Bank failures. Unemployment. The list goes on, and it all adds up to loss.
Some things never change, which is why we can never stop doing our best to overcome the gathering darkness. And the things we should put our hope in--things like truth and justice--don't really come by the creation or the will of men in power. They come through the simple act of an everyday person saying, "I may not be able to change the world, but I can do my best to make a difference in my little corner of it."
This is what we see every day, ordinary people making a difference. And we also see it "rubbing off" on the men, women, and children whose lives are affected. These actions of compassion remind us all that, though the darkness should cover us, God is still there (Psalms 139). He will and does provide.
Every good gift and every perfect gift is from above, and cometh down from the Father of lights, with whom is no variableness, neither shadow of turning (James 1:17).
Posted by City Rescue Mission at 2:23 PM No comments:

Boys will be boys 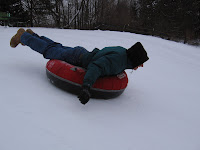 Last Saturday, Jim, our Associate Director, and a few other staff members took guys from our Transformation Program on a "field trip." Yes, it was a very cold day. Anyone who stepped foot outside, in Michigan, on the last day of January 2009, can bear witness to that. Then again, there's cold, and there's the cold of whipping down a hill, wind tearing at your face, and snow blowing in your eyes. Sledding, of course, the great American winter pastime.

In spite of the cold, all who were in attendance had a great time. It was a good opportunity for the guys to get out of the Mission, to spend time with the staff men, and to interact with 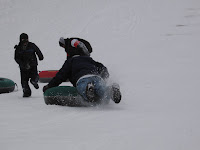 each other away from the stress of tight-knit quarters.
It is a great reminder, too, that sometimes we all need to step away, even from the important task of transformation, just to enjoy the world and the life we've been given by our great Creator. Praise God, there are even treasures in the snow (Job 38:22).
Posted by City Rescue Mission at 9:50 AM No comments:

Never judge a book by its cover 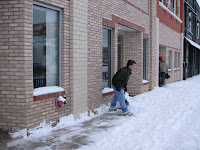 At the Mission, we scan through the Lansing State Journal to see if there are any articles that will help us as we serve the needs in Michigan's capital area. I must admit a particular weakness for two sections of the paper: the comics and John Schneider's column. I read the comics because, let's face it, during these times a little extra levity is always helpful. I read John Schneider because he talks about things that are happening to average, ordinary people, like me, in the area where I live and work.

In today's article, he talked about a man who was shoveling the snow from his driveway (not an uncommon practice this winter), when a van pulled up beside him and a woman leaned out and offered him a Bible. Being a believer, the man enjoyed the brief discussion and took the Bible willingly.
"There is a reward inside," the woman assured the man before she drove away. And she spoke the truth, literally as well as figuratively, because tucked inside was a crisp $100 bill and a tract.
John managed, the way he always does, to track down the who, why, and wherefore of the unexpected generosity, but the important point was that the gentleman who called John was not the only one who was approached in this creative manner.
Knowing this, I can't help but wonder how many refused the offered Bible from a stranger. Or how many took the Book, out of assumed kindness, and never bothered to look inside.
I couldn't have made up a better metaphor for the work that goes on every day in our chapel, and in chapels and churches throughout our country and the world. A man or woman stands up before a group and offers them the Word. Not his or her word, but the message as wri 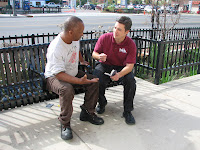 tten in God's Book. But it is entirely dependent upon the hearers as to whether or not they will take what they've heard and "open it," i.e. apply it to their lives.
There are probably several unhappy people out there, who read today's paper and realized what they almost had. But what joy for those who bothered to look inside. And what better joy for those who look further than the temporary blessing of cold, hard cash, and see the eternal transformation to be found within the pages of the Book.
Posted by City Rescue Mission at 9:49 AM No comments: