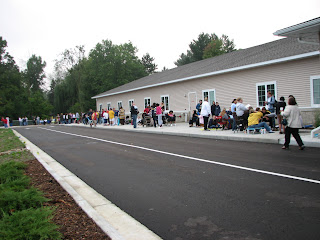 So, the weatherman had hinted at rain, and with this summer the way it's been going, it seemed as though it were a certainty. However, early on a Saturday morning, in spite of the dreaded forecast, hundreds of people were lined up outside the doors of Lansing Charter Academy. They were all waiting for the doors to open at 9 a.m.; some of them had been waiting for over four hours.
Inside, volunteers for the City Rescue Mission and Lansing Charter Academy were also waiting for the doors to open. Russ Kinyon, CRM Director of Volunteers, was explaining the process each family would need to go through to be eligible to receive a backpack from the Backpacks of Hope giveaway. An annual event, the City Rescue Mission collects backpacks and school supplies and distributes them to school age children of families in need. With the economic forecast nearly as gloomy as that of the weather for the giveaway day, this extra boost was greatly needed by many families.
At the rate of over 12 bpm (backpacks per minute), all the backpacks filled with school supplies were distributed within a few hours. The volunteers then collected remaining school supplies in plastic bags and gave them out as they were able. 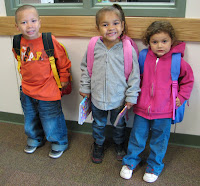 Altogether, over 1,300 children received help through this much needed program. The City Rescue Mission is grateful to the many volunteers and supporters who made the 9th annual "Backpacks of Hope" giveaway a reality. We're also grateful to Lansing Charter Academy, for offering their new building to us, and to Christian Services, for their help as well.
Posted by City Rescue Mission at 10:04 AM No comments: