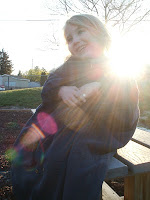 The 3-6-5 Photo chosen to represent the Mission this week is one I call "Rosie and the Sun." I actually love this picture, taken by a very talented staff member. The Mission focuses on three key areas: food, shelter, and hope. However, the biggest part of the three is Hope. For 100 years, our main purpose has been sharing the gospel. Because this is our goal, we do everything to the best of our ability, from cooking to cleaning, because everything we do represents Christ. Sometimes, we face challenges or discouragement, but moments like the one shown here help remind us of the joy found in serving Christ. This little girl doesn't understand the concept of homelessness; had her family not found shelter at the Mission, her experience could be very different. But they did find shelter at the Mission, and we had the joy and opportunity of showing them love, not because we are so good or even because they are. But because God is. See her smile and realize that she is happy and safe because your compassion helps us help others. Thank you for being a rescuer and for making a difference in the lives of those in need.
Posted by City Rescue Mission at 2:05 PM No comments: 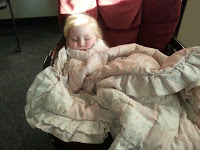 The photo chosen for our Centennial 3-6-5 Project this week is an image of a young girl wrapped in a blanket and dozing in one of the child care rooms in our women and children's shelter. What a blessing it is to be able to provide shelter and protection to these young lives. Last month, 47 children, like this young girl, were able to find that same comfort at the City Rescue Mission of Lansing. This is only possible because of your gifts to the Mission and your prayers on behalf of our ministry. Please keep this girl and her family in your prayers, as her mother seeks stable employment and they seek permanent housing.
I will abide in Your tabernacle forever; I will trust in the shelter of Your wings. Selah Psalm 61:4
Posted by City Rescue Mission at 4:08 PM No comments:

Then Jesus, moved with compassion, stretched out His hand and touched him, and said to him, “I am willing; be cleansed.” Matthew 1:41
Working for a non-profit, you often use and hear the word "compassion." However, on this Good Friday, I wondered what would happen if I prayed, "Lord, today, for one day, open my eyes and allow me to see others as Christ saw them."
I truly believe that we, as humans beings, are incapable of fully seeing with the eyes of Christ. Not only because our pride too often gets in the way but also because the burden of that compassion would be unbearable.
When Christ looked out over the multitudes of those gathered to hear Him speak, He didn't just see their motives and their attitudes, the secrets of their hearts. He saw beyond what they were to what they had been. To what they could and should have been. He saw them as children, full of potential and possibilities. He saw the gifts they had been given. And how those gifts had been squandered. He saw the paths they had chosen. And how every step had only taken them further beyond even the hope of rescue.
The scars of sin...what ugly marks they must leave on the human soul. And those are the scars that Christ took upon Himself, for us, on the darkest day in human history.
Praise God that in the moment when the full ugliness of man's heart was revealed to His creator, Christ did not turn away. He spread His arms in surrender and bore the weight of that ugliness and the consequences of our sin on the cross. He dragged that darkness into the grave and left it there when He rose again.
So that we could know rescue. Because Jesus Saves. Only Jesus Saves.
But what does it say? “The word is near you, in your mouth and in your heart” (that is, the word of faith which we preach): that if you confess with your mouth the Lord Jesus and believe in your heart that God has raised Him from the dead, you will be saved. For with the heart one believes unto righteousness, and with the mouth confession is made unto salvation. For the Scripture says, “Whoever believes on Him will not be put to shame.” For there is no distinction between Jew and Greek, for the same Lord over all is rich to all who call upon Him. For “whoever calls on the name of the Lord shall be saved.” Romans 10:8-13
http://www.blueletterbible.org/knowgod.cfm
Posted by City Rescue Mission at 11:05 AM No comments: