Beware of Men Selling Flowers to "Raise Funds for the Mission" 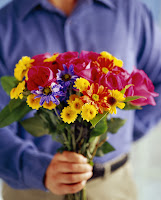 A vigilant Mission supporter just called to say she and some friends were approached by a man selling flowers "to raise funds for the City Rescue Mission." When she asked him for some documentation, he said he had to "get it from his car," at which point he left and never returned.
The City Rescue Mission of Lansing does not solicit funds in this manner. This man was not authorized by us and it is very doubtful that any of the money, which he managed to collect from the unsuspecting compassion of capital area citizens, will ever reach the Mission or those we serve.
This occurred on the southside of Lansing just this afternoon (04.03.09). If you are approached by anyone soliciting funds for the Mission, it is best to either ignore the person or to call your local authorities.
Posted by City Rescue Mission at 3:18 PM No comments: