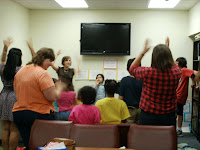 As we continue with our centennial 3-6-5 project, the photo chosen to represent the Mission as our facebook profile pic is "Children's Chapel." Last year, the Mission provided shelter to 339 children. A large part of that "shelter" is the opportunity to share the word of God with them and to show them the love of Christ. This would not be possible without your gifts to the ministry of rescue. As we pass the one year anniversary of the completion of our women's and children shelter, we look forward to the opportunity of seeing and serving more children in need. Thank you for enabling us to do so. Thank you for being a rescuer and for helping us help others!
Posted by City Rescue Mission at 3:56 PM No comments:

There is something of a debate going on regarding some recent decisions at some shelters around the country to ask guests to "pay to stay." While there are pros and cons, what was more sad was the attitudes revealed by those who chose to "comment" on the article. I was especially saddened by the statements from some who claimed to work or to have worked for shelters/service agencies.
Anyone who does read the comments on any internet article recognizes that the anonymity of the internet and the fact that you don't personally know those with whom you are arguing leads to extremely negative comments that the filter of personal knowledge or direct discussion would normally "block out." However, Christ said, "For out of the abundance of the heart the mouth speaks" (Matthew 12:34). And the majority of the "mouths" who chose to speak on this particular topic were surprisingly venemous in regards to those who are homeless.
Rather than enter into the argument of "to pay or not to pay," I'd like to offer a defense for Missions and a re-statement of our purpose. Missions by their very nature are independent; however, they were founded to further the message of the gospel to men and women who were lost in sin. The cast-offs, the unwanted.
Our founder, Thomas Dolton, was an alcoholic who was violently opposed to Christianity until his own conversion. His goal in starting a Mission was to reach out to men who were as he had once been. While the face of homelessness is changing (with unemployment, poor financial decisions, domestic abuse, divorce, etc. becoming contributing factors for homelessness), the Mission should continue to reach a hand of rescue to the unloved and unlovable. We have seen men and women that the world would consider hopeless. They would make their comments and use them as examples of the homeless stereotype that is so despised. Some of those same men and women have "used the system" for years before the message of Christ, preached faithfully by Missions, began to produce fruit in their lives. God forbid that we give up on these men and women. That we stop looking at them with the eyes of Christ (as sheep having no shepherd) and being to look at them with the eyes of the world (worthless losers who don't deserve compassion).
I would never say that Mission work is easy. Or that working year-in and year-out with such men and women doesn't require us to be in constant prayer for God's strength and compassion. But I would reiterate the words of Paul, "do not grow weary in doing good" (2 Thessalonians 3:13). The world is hungry for the unconditional love that can only be found through the grace of God. If Missions stop shining the light and spreading the truth that "Jesus Saves" even the ones who deserve it the least, then how will they hear? After all, the true "mission" of a Mission is not to provide a meal or a bed but to present the Good News that God's grace is sufficient for (and needed by) everyone.
For whosoever shall call upon the name of the Lord shall be saved. How then shall they call on him in whom they have not believed? and how shall they believe in him of whom they have not heard? and how shall they hear without a preacher? And how shall they preach, except they be sent? as it is written, How beautiful are the feet of them that preach the gospel of peace, and bring glad tidings of good things! Romans 10:13-15
http://www.msnbc.msn.com/id/43254521/ns/us_news-giving/t/homeless-getting-streets-could-come-cost/#.T3Di6VElarI
Posted by City Rescue Mission at 10:38 AM No comments:

The photo chosen for this week's 3-6-5 was of Tiffany (director of women and children's ministries) and Sherri (women and children's shelter manager) receiving a donation of Easter baskets for the children at our women and children's shelter. This same church also provided Christmas gifts for our guests. We are so grateful to the many in our community who think of others and look for ways not only to meet needs but also to show compassion.
What a great time of year to express compassion! Although we called this photo "Easter Comes Early," the truth is that the Mission has the opportunity to express the message of Easter all year long. This is possible because of your gifts. Thank you for being a rescuer and for helping us help others!
Posted by City Rescue Mission at 3:17 PM No comments: 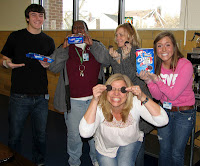 Last week's 3-6-5 photo choice was one a kitchen staff member took of our volunteers having their own celebration of Oreo's 100th anniversary! It was exciting (especially to those of us with a partiality for the sandwich cookie) to realize how many great things happened around the same time. Not the least of which is, of course, the Mission :) We are so excited at reaching the milestone of 100 years of service to Michigan's capital area and the opportunity to bring eternal joy to the lives of men, women, and children in need.

It's great, too, to be able to fellowship with our fellow rescuers and not only to give joy but also to live it, while we serve!
Posted by City Rescue Mission at 2:05 PM No comments:

The View from the Top 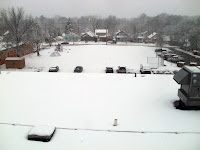 Most of us, at this point, would prefer to forget that just days ago there was snow on the ground. However, the photo chosen to represent the Mission as the profile pic of our page on facebook shows the snowy ground as seen from above: the roof of our Maplewood Center. This view helps me look at once in the past, present, and future. Seeing Maplewood is a reminder that a year ago, the building was still under renovation. While the east wing was occupied, the west wing (and largest portion of the project) still had to be completed. The quietness is reflective of that waiting period, where we had to "quiet" our spirits, our anxieties and eagerness, and rest in God's timing for the project. Now, in the present, it's difficult to remember those frustrations as we deal with today's challenges. The view also looks toward the future in that I can see the projects yet to be completed. A great example is the playground. Contemporary to the building's service as a school, the play area is in need of its own renovations. With the help of our local Kiwanis groups and Lake Trust Credit Union, we hope our "Mission: Play" project will be underway within the next few months. So many opportunities to continue to serve our guests! Because of your support of our efforts on behalf of men, women, and children in Michigan's capital area.
Posted by City Rescue Mission at 3:35 PM No comments:

Wash Me Whiter than Snow

The City Rescue Mission has been "capturing" images to represent the Mission as we celebrate our 100th year of service to Michigan's capital area. This week, the photo chosen was of the recent (and rare this winter) snowstorm that blanketed our community in a layer of white. In Psalm 51, David asks God to wash him "whiter than snow." For many of us, not just our guests, we have things in our past that haunt us. Choices or circumstances we would love to forever purge from our memories and our lives. It's more than just the consequences; there is the guilt that covers us in darkness and despair. However, Psalm 103 also encourages us that "as far as the east is from the west, so far has He removed our transgressions from us." Once we put our trust in Him.
That is the message we have proclaimed for our 100 years of existence, the message that shines from the cross that symbolizes the Mission, the message of "rescue" and forgiveness. "Hope lives and rescue can be found, within sight of the cross."
Posted by City Rescue Mission at 10:09 AM No comments: