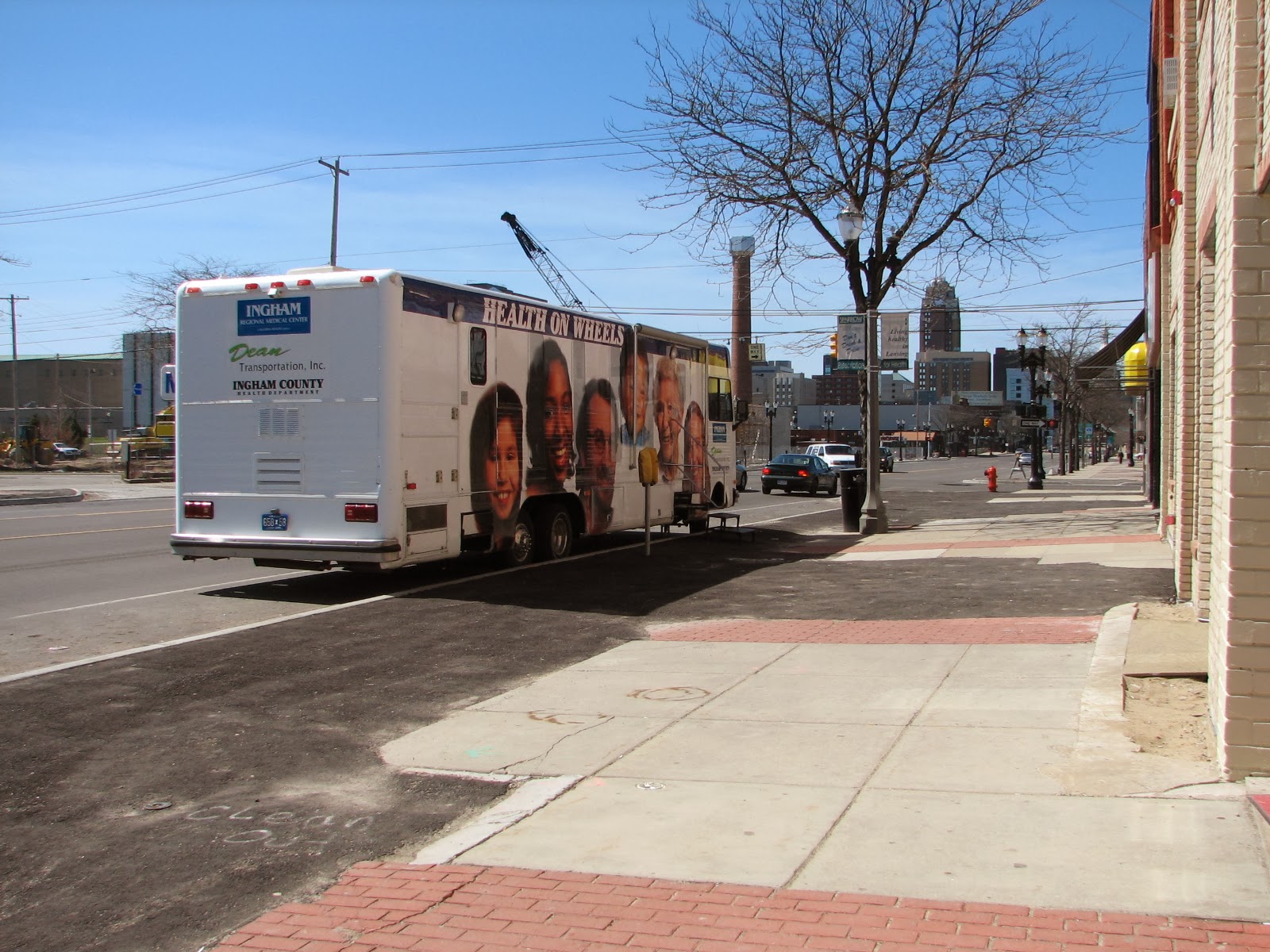 Sitting in my office, drinking Vitamin C in the form of orange juice, and hoping the lingering remains of my cold will end soon, I can't help but reflect on how much more difficult even having a cold is when you're homeless. Where do you go? Whom do you see? We are here to help with food, shelter, and hope, and we are so grateful for the agencies who work and serve, as we do, to meet needs in Michigan's capital area.

Some of those unsung heroes arrive at the Mission every Monday in a renovated RV that we call the Ingham County "Health Bus," a service of the Ingham County Health Department. These faithful medical practitioners have been providing medical care to our guests and others with limited or no income for many years, and they have a definite compassion and rapport with the homeless community. They also coordinate to be sure our guests have access to things like the Flu shot, to protect them and others with whom they come in contact.
Thank you, to the "Health Bus" team! We are so grateful for your service to guests of the City Rescue Mission and for your continued work throughout our community!
Posted by City Rescue Mission at 3:50 PM No comments:

Behind the Scenes: February 2014 "Mission Outlook"

I wasn't quite sure what to expect from the interview. I knew about Rev. Robert Jones III; he's something of a legend at the men's shelter, having served as night security for more than twenty years. My feelings going into any interview are usually the same: a mixture of curiosity and trepidation. That kind of hesitant waiting where your brain prepares to pay attention and know how to direct the questions to create a solid foundation of accuracy and detail for your resulting story.

The end result was unusual in that I asked maybe one question and Mark asked only a few more. The remaining hour and a half was Robert describing his thoughts and fleshing out what he's experienced in two decades of Rescue Mission work. Robert has an amazing aptitude to remember people and dates and times, and it became almost eerie as he drew word pictures of those people he had known.

"It's like I can still see [them] sitting there," and I could see them too. For Robert, the Mission is filled with the memories of those who have worked there, volunteered there, been sheltered and fed there. An overwhelming and very real mix of tragedy and triumph. There were terrible stories of men and women who never left their addictions or destructive lifestyles. Men and women who died long ago. There were victorious stories of those who used the Mission as a "stepping stone," "a bridge," to a better life and better life choices. And there were wonderful stories of men and woman who came faithfully to preach the word or serve a meal, who ministered to guests out of love and compassion. Men and women who had an impact on our guests and on Robert, as well.

When you are a part of a ministry like the Mission, that has served our community for over 100 years, you discover it is rich in history. The Mission, in a sense, is connected to the very heart of Michigan's capital area, because for over 100 years it has served as a physical embodiment of that heart, of the compassion of the people who live here, reaching out toward those in need. The Mission has legacy of service that spans generations.

Robert is a part of that legacy. As are those he remembers. As am I. As are you. Those who support the Mission do more than provide food and shelter for today. They lay a foundation of hope that will impact our community into the future.