"And the Light Shines in the Darkness..."

The ice storm of 2013 has a different memory for me than for many in mid-Michigan. With Christmas quickly approaching, Mission staff had collected funds and, due to the diligence of Icon Signs, managed to procure the perfect gift for Mark Criss, our executive director: a Jesus Saves cross.

I was contemplating just this morning on the many roads that lead us to the Mission, whether guest or volunteer or staff. For Mark, that avenue began with that Jesus Saves cross that hangs over the Mission chapel building on Michigan Avenue. He was heading to a Lugnuts game when he saw it. The resulting curiosity led to him become a volunteer, serving meals then serving on the board, and finally to his current position as the executive director. So when we had the ability to give him a smaller version for his home, the idea seemed inspired.


Then the lights went out over Lansing.
The blackout hit right before Christmas, and while the Mission was blessedly immune to the power outage, our executive director found his house to be one of the many without power. In fact, his entire neighborhood was blanketed in darkness.
Until he received his Christmas present. 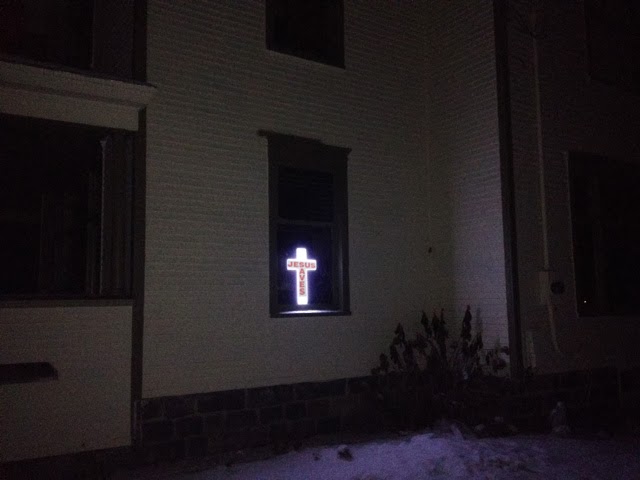 When I see this photo, which Mark posted to his facebook page after plugging his gift into a generator, I think of Christmas. The real Christmas. The message of Christmas that gets lost in the lights, and the tinsel, and the glitter, and the gifts. That message, that Christ came to earth to die for us, isn't just meant for Christmas. It's meant for every day. In that hushed, dark stillness caused by the blackout, the message shone with a brightness unequalled in the whole of its surroundings.
Then the lights came on.
This little cross got lost in the glare of porch lights and television sets, and, if we let it, the message gets lost too. In Romans 12:9 we read, "Let love be genuine. Abhor what is evil; hold fast to what is good." Hold fast. It's so easy to be distracted by the glitter of things that, if we truly think about it, are unimportant.
Thank you, Fellow Rescuers, without you that light of Truth would have stopped shining long ago. Instead, we can proclaim a message of Hope to all those in need.
The people who walked in darkness have seen a great light; those who dwelt in a land of deep darkness, on them has light shone. Isaiah 9:2
Posted by City Rescue Mission at 9:33 AM No comments:

“Now therefore fear the Lord and serve Him in sincerity and in faithfulness. Put away the gods that your fathers served beyond the River and in Egypt, and serve the Lord. And if it is evil in your eyes to serve the Lord, choose this day whom you will serve, whether the gods your fathers served in the region beyond the River, or the gods of the Amorites in whose land you dwell. But as for me and my house, we will serve the Lord.” Joshua 24:15
Lately, I've noticed a recurring theme in the words of my pastor and daily devotionals, the theme of choice. Joshua asked the nation of Israel to "choose," and that idea of choice included more than just a determination. More than just good intentions. While he asked his fellow Israelites to make a choice, his final words indicated that, for him, that choice had already been made and put into action. Choose and Do. No hesitation. No pause. No "I'll start tomorrow."
A friend once gave me a great piece of advice: make your resolutions (goals) measurable. Don't be vague and say, "This year, I'll be a nicer person." Or "In 2014, I'm going to make a difference." Put specific goals in place; look at your schedule; check out your budget. Do the homework and the research. Create a specific plan and follow through.
Recently, we received a call from one of our fellow Rescuers. Like many others after the ice storm, she was without power for several days. She was calling to ask direction to deliver a donation of new, heavy duty gloves, hats, and flannel shirts. While being without power, she'd come to better understand the needs of those out in the cold weather. So, she put a plan into place and made it happen. Today, there will be several grateful people because she put action to her compassion.
Another year has arrived. Its blank pages lie open, waiting for the actions that will shape our lives and the lives of those around us. You have a choice. Your options for 2014 are open. What will you choose?

Posted by City Rescue Mission at 11:16 AM No comments: