The difference a little love makes... 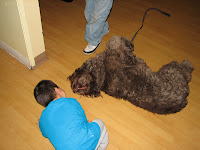 children's shelter in 2008. Even for young children, who don't understand all the implications of being homeless, having to leave your home and move into a house full of strangers must be intimidating. Children desperately need security and stability; the world is so much bigger than they are.
In the fall of 2008, our Executive Director began bringing his labradoodle, Azan, to visit the women and children in the shelter. In Hebrew, Azan roughly translates as "listen." The implication being the importance of "listening" to the message of the gospel which we present.
At first, "Greg" would only stare at Azan from a distance, but Azan is basically love wrapped in a fur coat. It didn't take long, and the dog's patience won over even "Greg's" fear and skepticism. Our hope and prayer is that all children, like "Greg," who come to our shelter ar 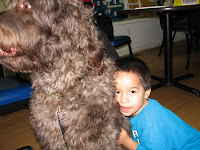 e shown enough love and patience to make their time with us more of a stepping stone and less of a stumbling block to their, and their mother's, future.
And we also thank God continually because, when you received the word of God, which you heard from us, you accepted it not as the word of men, but as it actually is, the word of God, which is at work in you who believe (1 Thessalonians 2:13).
Posted by City Rescue Mission at 1:27 PM No comments:

Last week, members of the City Rescue Mission staff went on a field trip to visit Mel Trotter Mission in Grand Rapids. They were very welcoming, and it was interesting to tour the facility and see the impact that ministry is making in Grand Rapids. It was also interesting to see how two ministries with so much in common can also be very different.

One of the things I found most confusing was the different "language" they spoke. They referred to men and women on their addiction/rehabilitation programs as residents. At CRM, we tend to call them program men ("men" because we don't currently have a women's program); sometimes, we just refer to them as program guys. We call anyone who uses our services, our "guests." To our neighboring Mission, they are referred to as "clients." Neither is more "right" than the other. It was just humorous how we could be talking about the same thing and not really understanding each other.
But, then again, isn't that more common than maybe we realize? Miscommunication based, not on a purposeful desire to deceive, but due simply to differing vocabularies. I don't know how many times I talk to people, and it's almost like we're speaking a foreign language because of how they are "interpreting" what I say rather than just listening. What a different place the world would be if we would try to learn our neighbors vocabulary and interpret from

that, rather than judging his words against our own assumptions and world views.
"...For the LORD does not see as man sees; for man looks at the outward appearance, but the LORD looks at the heart” (1 Samuel 16:7).
Posted by City Rescue Mission at 10:15 AM No comments:

What do you say?

So, today's blog is more of a question... What do you say to a mother who calls about donating her son's belongings because he has passed away?

We get a lot of unusual and interesting calls at the Mission and donations come in a variety of ways, but there's always that hardship of being grateful for the "benefits" of a tragedy. A husband dies, and his wife requests that donations be sent to the Mission in lieu of flowers. A young man just starting his life is killed in a terrible accident, and his father calls to ask if we'll take the extra food from his son's funeral dinner.

Compassion wrapped in a blanket of pain and loss... And what do you say?
Posted by City Rescue Mission at 9:50 AM No comments: